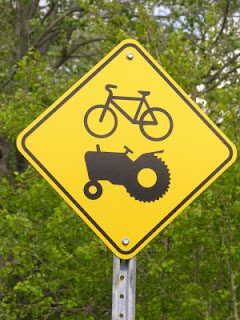 I had an exciting opportunity on June 18 when I conducted a community AT workshop in the Village of Guysborough Nova Scotia.

There is nothing unusual with me working in a Canadian community on improving their walkability and bikeability. I have conducted similar workshops in nearly 50 towns and cities in every province.

However, Guysborough is special because it consists of a population of barely 500 people in its village, with another 4,100 spread throughout an area of more than 2,000 square kilometres. This makes it by far the smallest community to conduct an AT workshop.

Members of Council and municipal staff joined me for a walking assessment of the village, and during discussions in Council chambers we reviewed possibilities of improving AT safety in rural sections of Guysborough. At the end of the day, staff indicated that they were confident that a community Active Transportation plan could be drafted by them and adopted by Council by the end of December 2009.

This is an exciting development for AT in Canada, as we see smaller and smaller communities making efforts to improve their human-powered transportation capabilities.

I will be in Nova Scotia working on a hiking book until early July. Regular blog postings will resume once I return to Ottawa.
Posted by Unknown at 12:48 PM No comments:

Interesting Website about cycling developments in Germany. Contains a number of links to other fascinating sites.
Posted by Unknown at 9:41 AM 1 comment:

The Toronto Cyclists Union has joined with CultureLink to develop a poster in 15 languages touting the message: "From back home, to our new home. Cycling is affordable, healthy and convenient." A cycling handbook is also under development, thanks to a grant from the city and the Toronto Community Foundation.
Posted by Unknown at 9:40 AM No comments:

Article - Montreal: Fighting for the right of way

Several new projects are out to improve urban life for people who prefer bikes and walking routes over cars, but there's a great irony attached.
Posted by Unknown at 9:39 AM No comments:

The Parry Sound Active Transportation Committee has unveiled their first-ever Parry Sound Walk and Bike Map, a brochure that highlights Parry Sound routes and trails — including three main tours for beginners, intermediates and experts — as a way to promote fitness and environmentally-friendly active transportation, which is any form of human-powered, non-motorized transportation.
Posted by Unknown at 9:38 AM No comments:

Suddenly it’s a whole lot easier to cycle and use transit together on the same trip. Thanks to a shift toward “active transportation,” it will soon be possible to combine transit and bikes for commuting or recreation right across the GTA.
Posted by Unknown at 9:37 AM No comments:

Ajax officials are hoping more residents will park their cars and hop on their bikes this summer and the Town is adding new bike lanes to entice them. "It's designed to give a safe cycling route to the GO station," said Mayor Steve Parish.
Posted by Unknown at 9:37 AM No comments:

Over the objections of the mayor's critics who claim he is waging a “war on the car,” Toronto city council approved a controversial plan to narrow Jarvis Street, a five-lane downtown artery, in order to install bike lanes and plant trees.

The 5th Montreal Citizen Summit is a social forum open to all and is based on the concept "The City We Want". The event will take place from June 5-7, 2009 at the Université du Québec à Montréal (UQAM) and will be an opportunity for citizens and civil society practitioners to strengthen their ties in order to collectively organise social action initiatives. The Summit will also be the opportunity for citizens to learn and exchange on urban issues related to this years themes:

[Active Transportation is a substantial component of the summit. Sessions translated in French and English. -MH]
Posted by Unknown at 9:34 AM No comments:

A quiet human-powered revolution is gaining momentum in our city. Vancouver is becoming a Velo-City, a city of cyclists, united by the simple pleasure of experiencing Vancouver by bicycle. Find out what the Bicycle Revolution is all about at the MOV.
Posted by Unknown at 9:30 AM No comments:

The City of Toronto’s City Planning and Transportation Services Divisions, in partnership with the Design Exchange, are hosting a presentation and discussion of public space design with world-renowned Danish architect Jan Gehl. The event will take place Wednesday, June 3 at the Design Exchange, 234 Bay St. from 3 to 5 p.m. The event is open to all and there is no charge for attending.
Posted by Unknown at 9:29 AM No comments:

Sierra, at 5801 S. Del Moral Blvd., incorporated skateboarding into a physical-education class this semester, and next school year Lauffer, Apollo, Challenger and Chaparral, the other four middle schools in the Sunnyside Unified School District, will offer the class.

New physical activities such as in-line skating, climbing a rock wall, line dancing, Pilates yoga and step aerobics are offered at the middle schools, along with classes on nutrition and healthy lifestyles in a program called Partners for Healthy Active Adolescents.
Posted by Unknown at 9:28 AM No comments:

Europe has nailed down the shared-bike program cold. France's Vélib, with 20,000 bikes, may be the world's largest initiative, but Barcelona's Bicing is touted as one of the most successful. The underpinnings of the program have less to do with environmental sustainability and more to do with the flow of people.

"The Bicing project is a consequence of the mobility policy of the city--its effects on traffic, and as also as sustainable element inside of the mobility of the city," Ramon Ferreiro, an official with Bicing, says. Bicing is Barcelona's way to pacify traffic, prioritize walkers and bicyclists.
Posted by Unknown at 9:27 AM No comments:

“Pedaling Revolution” is not about mountain biking the Moab sandstone formations in Utah or the network of bucolic paths that link some of the rural Massachusetts colleges; it’s not about racing, Lance Armstrong or what kind of spandex to buy. Nor is it about the various forms of extreme biking that have arisen lately: bike jousting on specially made high-horse bikes, BMX tricks or the arcane world of fixed-gear bikes, or fixies. For decades, Americans have too often seen cycling as a kind of macho extreme sport, which has actually done a lot to damage the cause of winning acceptance for biking as a legitimate form of transportation.
Posted by Unknown at 9:27 AM No comments:

Worth scanning, and contains links to a number of interesting Websites.
Posted by Unknown at 9:25 AM No comments:

"20's Plenty For Us" was formed in order to campaign for the implementation of 20 mph as the default speed limit on residential roads in the UK.
Posted by Unknown at 9:23 AM No comments:

To be added to the communication list of Active Transportation - Canada, please e-mail me at activetransportation@rogers.com, including your name, city and province of residence (or country, for our non-Canadian friends.

Your information will be kept confidential and not shared with anyone else.